I used to own this, didn't like it much overall. Perhaps a revisit is due. How anything could be better than "Gypsy" is hard to conceptualize, though. Yes it's hard. It actually doesn't sound so good in the context of the album, but i have loved that single for ever and ever, from a certain angle it is the ultimate Nicks song. Buckingham's guitar solo I've warmed to "Only Over You," however. The Mac revived "Eyes of the World" on their tour — an excuse for Buckingham hysteria. Oh — what do you think of the Stevie songs?

Love "Gypsy" of course see prior post. The other one depends on whether I can accept rootsy Stevie in my life. Like them both a lot on first listen. I don't think her voice really "settled" until Say You Will , by which point the damage sounds naturalised.

Say You Will is really great I've been meaning to replay since I discovered Marcello's marvelous defense a couple of months ago. Seriously, Say You Will is so underrated. I'd say well over half of the tracks on there, if they were transported onto other FM albums, would be considered highlights.

The real highlight is "Thrown Down," which on the most basic level craft is terrific, and makes an excellent case for Nicks' continuing growth as a songwriter Buckingham's guitar filigrees on the chorus are superb too. It sounds tired to keep repeating how much McVie is missed; she's the emollient, whose grease would have prevented the album from feeling twice as long.


I am loving this album so much! I have been listening to it obsessively. Every song is good except for "Oh Diane" and even that is bearable now. I just heard this for the first time. It might not be as "classic" as their '70s albums, but it sure does have a lot of stunning songs. But I have a pressing concern about the opinions of everyone on this thread: what do you all have against "Oh Diane"???

I remembered reading about how it was supposedly bad, and when I heard it I was shocked by how beautiful it was! It's so good!

I don't get you guys! It's just the hack Elvis impersonation that annoys. I like it more than I did initially. It's still the worst or least good song on the album. Re Stevie - "Gypsy" is of course fabulous, and I'm totally in love with "That's Alright", the chorus is brilliant. Only "Straight Back" is a bit off in the songwriting dept.

I can't put my finger on it.

CD 1 will be the original album remastered and CD 2 will feature bonus material taken from the Mirage era, such as B-sides and outtakes. A track listing for this release has not yet been announced. I can't wait for the Tango reissue. The B-sides and 12" mixes from that era were amazing. I love this hyperactive uber-Buckingham all treble, all the time edition of FM. Sp precise yet so crazy at the same time. We never polled this iirc? Could it be because Gypsy would be the ahem, "landslide" winner?

Alfred, Lord Sotosyn , Saturday, 25 March two years ago link. Also, has there been any more news about the forthcoming Buckingham-McVie-really-should-be-a-Fleetwood-Mac album? I believe it'll be out this summer. For her part, Nicks has said that, due to the state of the industry, the full band probably won't make another album. I was under the impression that Mick Fleetwood and John McVie owned the name "Fleetwood Mac" and therefore could dictate who could and couldn't be in the band? What's interesting about Say You Will is how hard it is to separate Nicks and Buckingham's efforts in terms of quality - well, probably Buckingham has a bit better quality control, but - "Bleed To Love Her" aside - Nicks' highs are a little bit higher.

I love "Hold Me" and especially "Gypsy" - that one has always, in my head, sounded like some magical ethereal wonderland journey suggested by the best possible interpretation of the title. Is the fear that it wouldn't make enough money? They certainly all still tour together I saw them last year, and they were amazing. Pretty much. She's asked about it in the current Rolling Stone, and she replies something to the effect of 'why spend a year recording something that won't make money?

Once an artist, now a capitalist.

Please stop interviewing her. You can go back further than that - the fact that the band didn't disintegrate circa the recording of Rumours may have had a lot to do with two of the band members finally getting their lucky break and plenty of money and the other three members finally seeing some big success and plenty of money after years of trying to re-establish themselves post-Peter Green. Alfred, Lord Sotosyn , Sunday, 26 March two years ago link.

I don't think we'll do another record. If the music business were different, I might feel different. 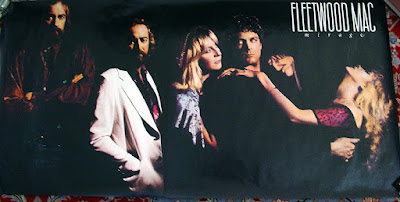 I don't think there's any reason to spend a year and an amazing amount of money on a record that, even if it has great things, isn't going to sell. What we do is go on the road, do a ton of shows and make lots of money. We have a lot of fun. From Wikipedia, the free encyclopedia. Fleetwood Mac. Christine McVie Jim Recor. Buckingham Richard Dashut. McVie Robbie Patton. McVie Colin Allen. Dave Bartholomew. Retrieved 13 February Archived from the original on 19 October Retrieved 9 December The Guardian.